I was having a conversation with a guest yesterday that really made me think . She had mentioned that she has forgotten what her life was like pre-COVID. Only 5.5 months have erased 40 some years of memories of how she use to live. It triggered a memory from a documentary called “Jim and Andy, The Great Beyond”. Jim Carrey shares his experience after filming “Man on the Moon” in which he transformed into Andy Kauffman. Jim took this role so seriously that to say he “played a part” would be incredibly insulting. Jim stayed in character the entire time…even when he was not on set…100% of the time.  He was immersed.  Although they refer to this as “method acting” I can’t help but feel that it is something bigger than that.  I highly recommend the documentary.  It is available on Netflix.

During an interview, Jim Carrey was talking about what it was like when they wrapped up filming and he was returning to himself.  He began to realize that he couldn’t remember who Jim Carrey was.  He had forgotten what he liked, didn’t like, he had even forgotten what his politics were.  1.5 years of living as someone else has completely wiped his memory.  He is a very deep thinker so this really led to a mental breakdown of sorts which eventually led to a beautiful place. I don’t want to give too much away so I will just get to the point.

If Jim Carrey can completely forget who is by “pretending” to be someone else…isn’t this the very epitome of “fake it til you make it”…or my favorite version of that quote and really more suitable to this story “fake it until you become it”.

How often do we just accept things about ourselves because “that’s just who we are”?  This truly blows that theory right out the window.  Same with what my guest was talking about.  Five and a half months of changing her behavior to comply with orders that are out of her control and poof, she can’t even remember her old behavior.  There is an amazing lesson to be learned here.  You can choose to be whoever and whatever you want to be.  The longer you put those new behaviors into practice the more natural they become.  After a while, you don’t even remember being any other way.

This reminds me of my journey to becoming healthy…physically, mentally, emotionally, and spiritually.  I know there was a time in my life that I was not like this.  If it weren’t for photos and stories from others I don’t know that I would even remember NOT being this way.  Not to mention this journey only began 4 years ago.  This new “Gina” is literally not much older than a toddler, however I don’t know any different now.  It’s crazy when I really think about it. And because I am constantly evolving, learning, and growing it stands to reason that the woman I am toady will cease to exist in another 4 years.  The beauty is I get to choose who that woman will be.  If I can imagine and visualize who I want to evolve into…I can!  I basically just play the part, right?  Like completely submerge myself into this “character” that I want to be.  It’s only fake if I choose a character that does not truly resinate with me (like the part of a millionaire, swimming in an infinity pool, overlooking an ocean, eating fresh seafood caught that very day by my own hired fisherman, prepared by my personal chef, cleaned up after by my maid, chauffeured around, and a full staff of people at my beck and call….that would’ve been fake because, although that sounds great, it does not feed my soul, I’m sure for some it definitely does)  I want to play the role of someone who makes an impact on the lives of others.  When I die, I want my legacy to live on.  I want to empower people and let them know that they are capable of anything.  I want to create things and take in every moment of this life.  I want to breathe in nature, I want to feel the sun and warmth on my skin.  I want every action, thought, and feeling of mine to come from a place of love…instantaneously.  I want everything I own to have meaning and purpose.  I want to love the skin I’m in at all times.  I want everything I consume to nourish my mind, body, and soul.  I want everyone in my tribe to feel heard and loved.  That is the character that I want to play…and over time I will just be that person.  I work on this every single day of my life and I most certainly have my days in which I fall out of character or “forget my lines” but I take a breather, forgive myself, and jump right back into the scene.

I want this to serve as a reminder that we have a choice as to who we want to show up as in the world.  It takes authenticity, consistency, and perseverance.  It’s certainly not easy but when you are experiencing that feeling of living the life you want…it is worth every excruciating moment!  So write the script, get into character, and play the part! 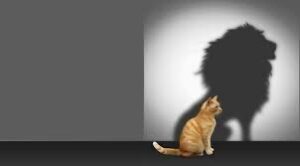 Listen to our podcast for weekly inspo

“Gina and her staff are truly AMAZING. When you walk into the salon you are always greeted with warmth, kindness and style. I have NEVER been to a salon where they are always on time except LOLA-it is truly incredible."
Kim D.
“I moved to Geneva and I was far from my old stylist. But I found Lola on Google and loved the whole aesthetic of the salon. From the furniture to their zero waste initiatives (big selling point for me!)"
Kathryn A.
“This salon is great! One of the best blowouts I've ever had. Can't wait to go back for a curly cut! Highly experienced staff.”
Judith S.
“Gina does the best color around and listens to what her client's want and utilizes her training and experience to make you look and feel your best."
Kim D.
“I came into the salon for the first time with an idea of chopping my hair off. Gina helped me choose a style that best suited my face shape and maintenance habits. It was perfect and better than what I had imagined."
Kathryn A.